I was invited on a FAM to the Czech Republic from the Czech Tourism Board. We started in Prague and traveled around the Bohemian countryside visiting castles, glass factories, and other sites listed below to really get a feel for what makes Czech Republic such a unique vacation destination.

Prague and Czech Republic is a perfect destination for anyone interested in traveling to Europe. I’d recommend it to those who have done the “European Majors” (Paris, London, and Rome). Prague is truly a European haven with cobblestone streets, architecture that mixes baroque, gothic, cubism, and classicism, tons of cafes with people watching, but it’s not as busy or touristy as Paris. 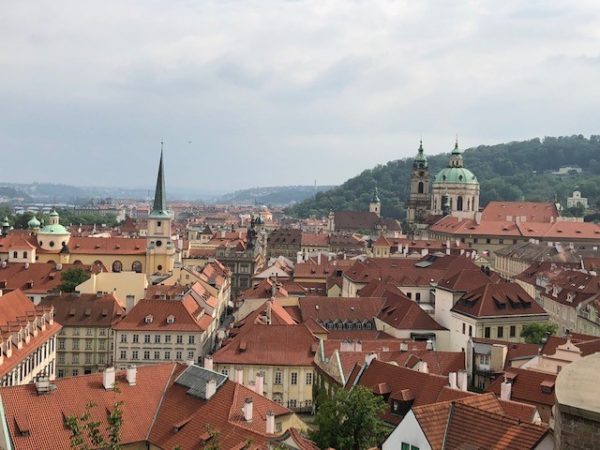 With the cost of living and hotel costs being so much lower, this is a great spot for millennial travelers. In fact, many people from other parts of Europe come here for stag parties or weekend getaways because it's inexpensive. Although they are part of the European Union, they are not on the Euro and have their own monetary system (Czech Koruna) which works to your favor in the exchange rate. Meals, drinks, and activities are relatively cheap, which isn’t something I would say about most countries in Europe. I went to dinner with a friend and with two glasses of wine, an appetizer, and a pasta entrée, my total was only about $25.00. Plus, this was in a restaurant in Old Town Prague, which is the most “touristy” area of all of Czech Republic.

Here was the itinerary we followed to experience what Czech Republic has to offer:

On this day we checked into our hotel located right in the heart of Prague near Wenceslas Square. This was a quick walk, maybe 10-15 minutes to the Old Town and Charles Bridge. It’s important to note that most hotels in Prague do not provide conditioner and have minimal bath amenities, so I recommend that you bring travel-sized amenities with you.

After check-in, we had dinner at Hotel Adria’s restaurant which is decorated as if you were in a cavern.  The dinner was a tasting menu of traditional Czech food and was absolutely delicious. 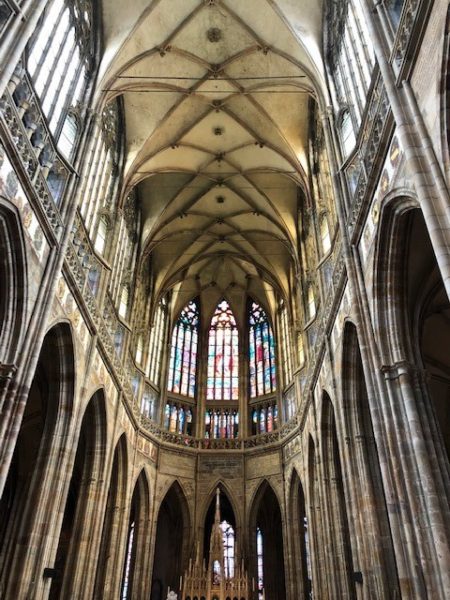 Site. Charles Bridge goes over the Vltava River and is probably one of the most recognizable landmarks in Prague. I will say that it can get VERY busy. Instead of seeing this on a tour, wake up early in the morning (the sunrises are really beautiful here anyway) so you don’t have to fight the crowd. Old Town Square is really beautiful and where the Astronomical Clock is (although it was being repaired when I was there, so I didn’t get to see it).

The restaurants here can be a little expensive, but if you wander a few blocks away and you’ll find some lower cost options. You will see a ton of statues and monuments dedicated to King Charles IV (also what the Charles Bridge is named after as well as Wenceslas Square). He is highly revered in Czech Republic.

From here, we took a bus up to Prague Castle. There is so much to do and see in this area. In Castle District I found a wonderful little coffee and pastry shop where you can find locals and ex-pats working away on their laptops or enjoying the company of their friends. I loved the Castle District itself because of the winding cobblestone streets, and it is set above Old Town, so it offers an incredible view.

Now, on to the castle itself: The castle complex is the largest ancient castle in the world, not only housing the castle but also monasteries, churches/cathedrals, gardens, a vineyard, and plenty of other halls and towers. The castle itself dates back to the 9th century, and is just as grand as what you would expect. In the complex is St. Vitus Cathedral, which is arguably one of the most impressive cathedrals in the world. Charles IV commissioned the construction of this cathedral in the 1300s and was not completed until the 20th century. St. Vitus is an incredible example of gothic architecture, and will leave you completely awestruck. Strahov Monastery is here, which is famous for one of the most beautiful libraries in the world. Unfortunately, we did not have time to see it, but I would definitely recommend it to any book or history lovers.

This was one of my favorite days! We first went to Cesky Sternberk, which is a gorgeous castle in the Bohemian countryside that’s only about a 30-40 minute drive out of Prague. The castle was built in the 13th century, and is still owned by the same family. The current owner is in the 20th generation of the founder. He makes appearances every now and then, but more than likely you won’t see him. However, there have been lucky ones that have! The castle has a beautiful view of the river and the countryside, and I highly recommend taking the tour and enjoying the view. 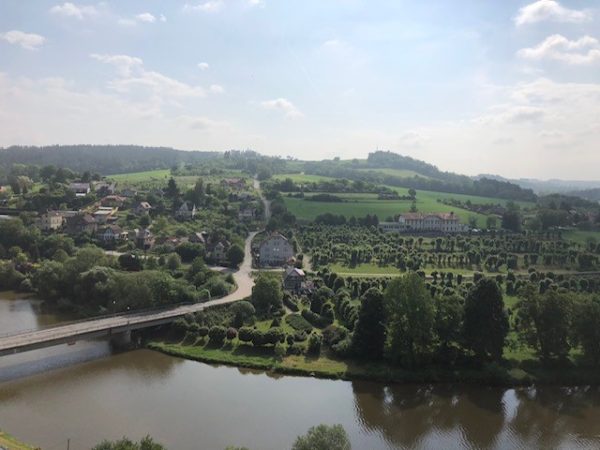 From here, we traveled to Kutna Hora, a UNESCO World Heritage Site. I loved Kutna Hora - it is the cutest little European small town that is full of history, architecture, adorable shops, and again, a vineyard. Driving up to Kutna Hora, you can see St. Barbara’s Cathedral dominating the skyline. While St. Vitus was more ornate, because St. Barbara’s is in the countryside, its sheer size will leave you feeling so tiny. It’s absolutely gorgeous, and the inside is just as beautiful. It’s hard to explain exactly how domineering this cathedral is in this tiny little town, but I definitely recommend experiencing it. The town itself is super cute with cobblestone streets that wind and were lined with little shops and cafes.

We also went to Sedlec Ossuary, which is also known as the Bone Church. A monk created this from 40,000 human skeletons to show that it does not matter where you were in your status in life, we all end up the same way.

Day 3 Discovery: Czech wine is SO GOOD and so cheap. They don’t make enough of it to export to the US, but being a little bit of a wine snob that I am, I LOVED their wine.

Today we explored Zdar nad Sazavou, another small town in the Bohemian countryside. We went to see the Pilgrimage Church of St. John Nepomuk at Zelena Hora, 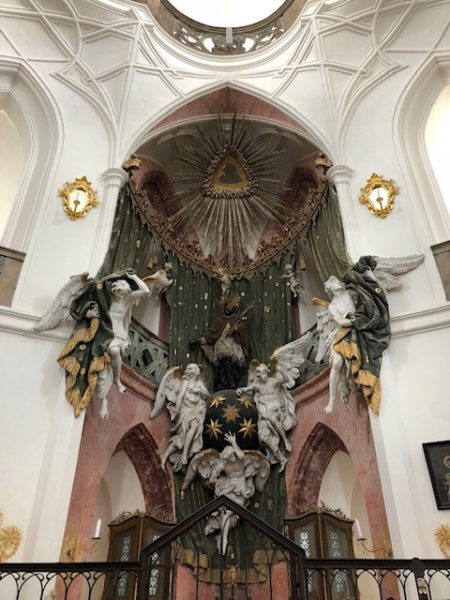 another UNESCO World Heritage Site. The Church is in the middle of the rolling hills, with an amazing view. This is also on the border of Moravia and Bohemia (the two regions of Czech Republic). This is a very mathematical building, as if you had a birds eye view of it, you would see that the number 5 is dominant in the layout and proportions of the church, and from above you can see it as a 5-pointed star.

From here, we traveled to Litomysl, which reminded me of the small town in Beauty of the Beast. Hotel Aplaus was one of my favorite hotels on the whole trip. It was set in the middle of the town (again with the cobblestone streets with shops and cafes) and my room had windows that I was able to push open like Belle, hear the ringing of the church bells and the birds, and have a view of the quintessentially European town. We had dinner at the hotel, in a private greenhouse-feeling room that had a view of Litomysl Castle and the grounds surrounding it. Litomysl is a bit further from Prague, a little over 2 hours away, and is almost to the Poland border, but it was my favorite little town that we visited on the whole trip.

There are a serious number of castles and cathedrals in Czech Republic. I had never been to an actual castle before this trip. Now, not only did I visit the largest in the world, but I saw 5 gorgeous castles plus countless cathedrals. I also experiences 4 of the 12 UNESCO World Heritage Sites that are in Czech 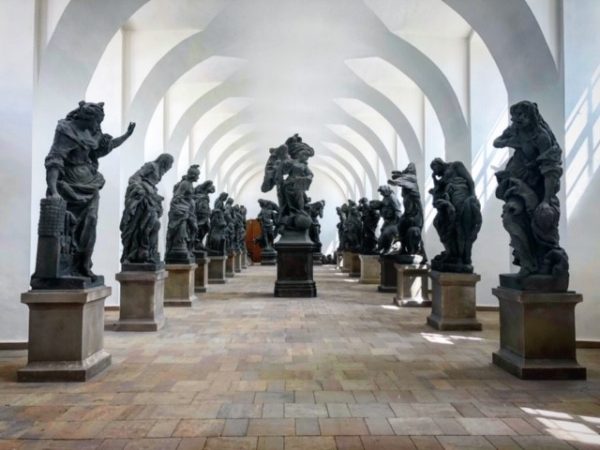 One of the 4 UNESCO World Heritage Sites was Litomysl Castle which we saw after breakfast and check out. Litomysl castle was beautiful and very different from the other castles that I saw as it was meant to be more of a leisurely castle and not a fortress. Included was an incredible theatre to host plays in for entertainment.

From here, we traveled to Hospital Kuks, which was impressive. The building itself is a Baroque architectural dream. There are springs around Kuks that were believed to have medicinal properties, so the goal was to change Kuks into a type of medical spa. Set right on the Elbe River, Kuks would attract artists and fairs as well as those looking to heal themselves. One of my favorite parts of Kuks, aside from the beautiful gardens, was the hall with allegories of the vices and virtues with Alpha and Omega in the center of it.

We drove on to Liberec where we had an informal networking event at Jested, a small hotel that looks like something out of a 60s modernist James Bond movie. Jested is 1,012 m above sea level and has one of the greatest views I’ve ever seen. From the 360-degree view of the region you can see Czech Republic, Germany, and Poland. The cable ride up is a little nerve-racking, but if you aren’t terrified of heights, it’s one of the most incredible views I’ve ever seen. There is a restaurant there too if you’re interested in a romantic dinner with an incredible sunset. 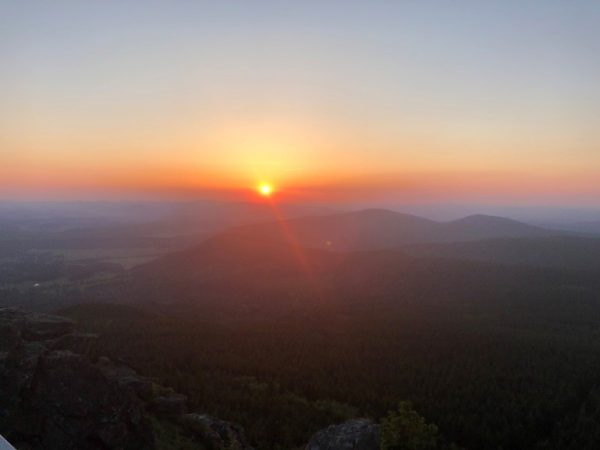 We were hosted by the Liberec Tourism Board to show us the region, and it was incredibly beautiful. Our group took scooters along the Jizera Greenway and stopped at local coffee shop. We also visited Ypsilon, a very unique golf club set in the mountains, and Hruba Skala Castle. Both spots offered incredible views.

We also visited Sychrov Castle, which is a neo-gothic French castle with the largest collection of French portraits in Central Europe. Yet another beautiful castle with beautiful gardens and an incredible courtyard. From here, we went back to Prague to prepare for departure the next day.

Attending this FAM to the Czech Republic with the Czech Tourism Board was such an incredible experience. Interested in traveling to Prague and the Czech Republic? Let me know! I love offering recommendations and telling stories from my trip and can help you plan the perfect European adventure.

Written by Rikki Harter
Rikki is a Leisure Travel Consultant at UNIGLOBE Travel Designers who focuses on luxury travel and customized experiences. She is a history fiend, and loves traveling to destinations that have stories to tell. In her free time, you will find her with her husband on the search for the perfect cheeseburger.